You are about to attend to an important event.  The dress is ready.  The makeup's done.  The hair is set.  The accessories shining like the sunrise on a hot summer day.  You take a bath and pamper every little detail on your anatomy.  You glide into your room's curtain and stared at the image on your mirror.  An unfamiliar face is facing towards your direction.  The zit.  The wrinkles.  Uneven skin tone.  Dark under eye area.  Who is this creature?  Am I dreaming?  No, this is worst than a dream that a nightmare would be an understatement.
What a wreck!  Only if you discover something like the PROPER regimen by one of the trusted skincare line.  Needless to say, this scenario above happens to almost every chic girl reading this blog, and yes hottie, I'm referring to you.  If only there's a magic wand that would erase all the impurities pollution, lifestyle and and the environment has given you.  Or perhaps a time machine that will bring you back in the youthful glowing skin you rave at this moment in your life.
But we ain't living in a fairy tale and there's no fairy god mother that will vanished those with the snap of a finger.  Thank God for His creation of such witty scientist who makes dreaming a reality.
And now I ask, why didn't I discover this line until that big event in my life? 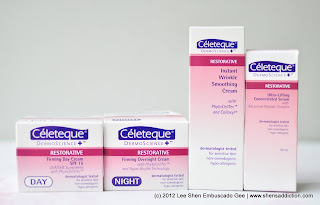 Want to win a skincare set specially for your problems area by Celeteque DermoScience?
Check this out on Shensaddiction for more details.  Best of luck!
Posted by Sows at 6:29 PM 27 comments:

She is but a jolly, easy-go-lucky girl.  She giggles, laughs and enjoys every little thing around her.  The nicest among the nicest.  She graduated in the study of positive thinking analogy with the degree of proper gossip handling and masters in the "I can do this" thingy thing.  She's then a student thirsty for stardom, and now a self-proclaimed blogger, poet, and a singer.  (PAGBIGYAN NIYO NA.)  She's just born that way but for the record, she's not an anti-Christ. (Lady Gaga song play here.)

But she's just a typical emotional girl in her mid 20's.  A middle child of three, she also has tons of insecurities for having good-looking siblings that has brains too.  She often asks her Creator,

"God, are you mad at me?  Why didn't you woke me up when you shower Earth with such blessings?"

"What's wrong with me?  I'm decent looking and...and..FAT,"  she often murmurs.  She turn her head and saw several people looking at her, as if telling themselves, "she's damn crazy".  And yes, she always love someone who doesn't love her.

For her 5'4 frame, 200 pounds is just too much.  She then realizes only if she'd have a super bod, she'll have greater opportunities in love, in the society, in work, and in life.
She, together with her will, battle it out against obesity.  She randomly search for articles about her condition.  She also improvised dumbbells with half kilo cement and a broomstick handle cut into two.  She also tried the "after six diet".  And as the name goes, she'll eat before the clock hits 6pm.  She's binge eating. What a FAILURE.

As a couch potato, her eyes brighten with excitement as the skinny model from an advertisement pop up.  After 2 weeks of eating their product, she is able to flaunt her superbod.  Now, she's drooling. 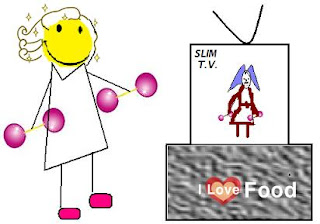 Upon composing herself, she tells herself, "I can do that as well!"  Just wait for that! Bwahahaha!

Now, she's on her second week of the program.  With exercise, she lose about 2 pounds.  Better than nothing.  Now, her goal is to be like her: 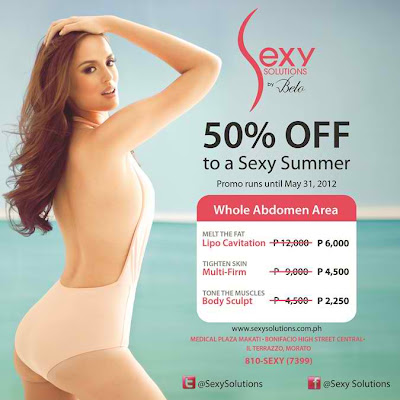 And if and ever I'll be (and I'm positive on that), she'll just turn unto Sexy Solutions for the spiderwebs, cellulite and stretch marks that'll be left of her future sexy figure!  But oh, "she" is the author of this blog and ALAS! this could be counted as her "About" page.  What yah think, guys? 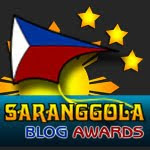